An intimate knowledge of the clover acreage in any given district should be sufficient guide to its suitability for honey production, when due consideration is given to the question of rainfall. – Le Maistre’s 1943 Beekeeping for Beginners in Alberta

A key component of beekeeping is understanding the plants that produce nectar and pollen in a certain location.

Even with the best management, bees cannot generate honey without a source of the raw materials: nectar and pollen, as this quotation does not specifically mention canola or alfalfa. Although some hereditary factors have a role in the regulation of nectar production, any element that influences the plant’s short- or long-term health will also have an impact on nectar secretion. For optimal secretion, different plant species have distinct needs. The amount of nectar secreted and the sugar content of that nectar may be influenced by soil moisture, soil type, precipitation, air temperature, and the number of daylight hours. For example, in a drought, canola fields may bloom for a brief period of time, and during that time, the amount of nectar released will be small; any water that is available will be used for plant maintenance and development first.

When they observe extra honey being stored in their hives, beekeepers refer to a “honey flow.” The phrase “nectar flow” would be a better fit since it refers to the nectar that the bees collect and transform into honey as it flows from the blossoms. On the prairies, the nectar flows are typically highly distinct, although in other parts of Canada, like on the west coast, the flows could be less intense and spread out over longer periods of time.

Most prairie regions have one of three nectar flows: 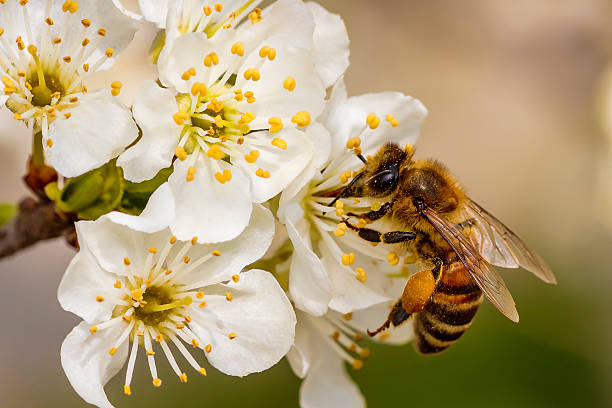 The bees often receive honey from the smaller spring and fall flows, which they use for overwintering and spring buildup, respectively. The primary nectar flow provides the beekeeper’s extra honey harvest. Almost all of the major prairie Nectar and Pollen plants, with the exception of alfalfa, are visited for pollen as well, thus the three nectar flows are typically accompanied by pollen flows.

The spring flow typically takes place between the end of April and the end of May or mid-June. The primary flow takes place between the end of June and the end of July, with the late flow occurring in August and occasionally into September. The beekeeper may want to have a colony on a scale at the home apiary to be able to track when the flows and dearth times are happening. Periodic scale readings make such information instantly accessible, allowing management strategies to be changed as necessary.

Categories of nectar and pollen plants

There are two main categories of Nectar and Pollen plants: major and minor. Bees gather nectar and pollen from a wide variety of plant species, but only a small number of these species are abundant enough and generate enough nectar for honey to be obtained in excess. Additionally, nectar production by a specific plant species can change depending on the soil and climate. In certain areas, plants that are regarded as major sources of nectar might only be a minor source elsewhere. Minor honey plants could occasionally yield heavily or poorly depending on yearly changes. Once more, the beekeeper needs to become knowledgeable about the unique characteristics of his or her local area through observation of flowering plant and date data, weather patterns, and scale colony records. Nectar plants of importance include the following:

During the early spring, poplar, elm, and other deciduous trees also produce some pollen.

It is important to know about Nectar and Pollen if you wanted to be a successful beekeeper, do not forget to read about The interesting tour inside the beehive: what can we see in the bee colony?

OTHER PRODUCTS FROM BEES