In this article, we will review the journey of the worker bees while collecting nectar

And if you are interested in bees, you can read our article that read strange facts about honey bees. Worker bee responsibilities include the following:

1. After the incubation period is over and they emerge from the honeycomb cell, worker bees clean themselves for the first three days of their lives, feed by stealing food from the feeder bees, clean the brood cells, and make sure the appropriate temperature is maintained by pacing around the hatchery area.

2. Worker bees that are 3–6 days old feed older larvae a combination they make from pollen and honey from comb cells.

3. Worker bees that are 5 to 15 days old feed the queen bee and the young larvae by secreting royal jelly. In front of the hive, they slowly start to fly together in unison.

5. On the flight board and in front of the hive flight hole, worker bees who are 18 to 20 days old stand watch.

6. The worker bees begin to work outside the hive after the 20th day. pollen, nectar, etc. to the hive. they deliver.

Who sorts the royal jelly? Additionally to this normal division of labor, worker bees can also create royal jelly if necessary between the ages of 20 and 25 days. In other words, bees can perform tasks that are inappropriate for their age by adapting to changing circumstances.

When do bees start working outside the hive? The worker bees begin working as foragers outside the hive once their 20 days are up. Bees transport nectar, pollen, propolis, and water to the hive during this time. Early in the morning is often when they begin their pollen-collecting trip. With the aid of the tough hair covering the legs and body, the mouthparts gather the pollen, store it in pollen baskets on the hind legs, and transport it to the hive. The bee that takes flight may return to the hive by bringing back simply pollen or it may occasionally bring back both pollen and nectar.

How much pollen can bees carry?

The amount of pollen that a bee can carry at once varies depending on the source, but it typically ranges from 12 to 30 mg. Pollen that weights one-third of the bee’s body weight can really be carried by the bee. A bee may load her pollen basket in 6–10 minutes and can make an average of 5-8 pollen excursions each day, with a maximum of 11–20. The bee collects the most pollen during the summer months, which are also a time when brood rearing activity is at its peak.

How do bees carry nectar? 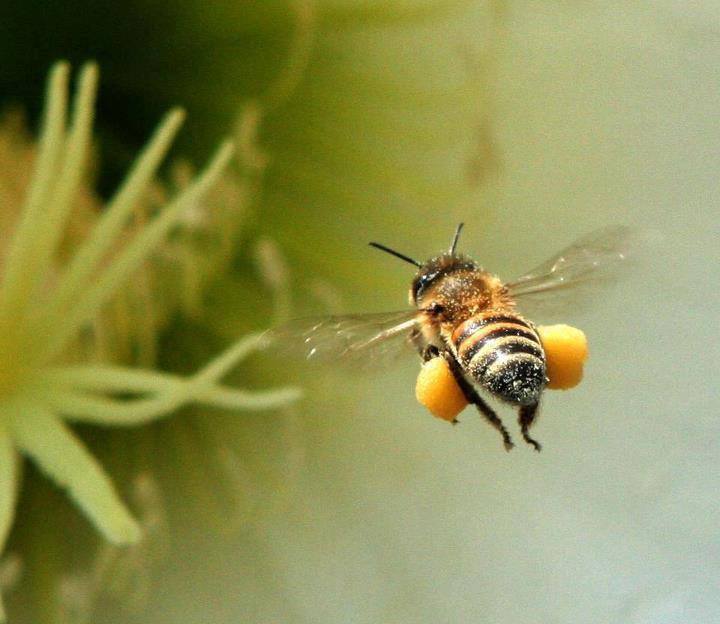 The nectar is consumed by bees by swallowing it with their proboscis. The bee can transport nectar up to 70–85 percent of its own body weight each time. The maximum amount of nectar that a crop may consume is 70–85 mg. Depending on how far the source is from the hive, some of the collected nectar is consumed by the bee to meet its energy demands during the flight. Consequently, 30 to 40 mg each time, on average. It might carry nectar. No one flower contains enough nectar to supply the crop of bees. For a nectar load, it should therefore typically visit more than 100 flowers. The nectar-seeking bee spends 7.5–10 hours each day working and makes 10–17 journeys to collect nectar.

If you want to be beekeeping , you need to know all these things about worker bees in order to know where you are going to build an environment for the hive that you will raise.

THE BEE FAMILY AND THE BEES' LIFE ORDER