How to Increase the number of bee colonial Starting a Bee colony is best done in the spring and early summer for the best results. Colonies created later than this may need further management to make sure they have enough bees and honey and pollen stores to make it through the winter. Throughout many areas in the spring and early summer, there is typically a good supply of nectar and pollen if there has been enough rainfall. These circumstances are perfect for colony development and are frequently the greatest for beginning beekeepers to handle bees.

Colonies that have been developed in hives occasionally become available for purchase and may come in different sizes of one or more boxes. The adage “buyer beware” applies in this situation, and the following information will assist buyers stay out of problems. A bee colony with a nice disposition ought to be in a used hive. For the time of year it is being offered for sale, the colony shouldn’t be viewed as weak. At the absolute least, all stages of brood should be present in combs that contain brood and be properly covered by bees. The brood pattern should not be dispersed like a pepper box and the queen should be laying eggs.To give the colony enough nourishment in the short term, combs with honey and pollen should be present. The hive’s components should ideally be in good shape and have consistent dimensions. Check for damaged frames and combs as well as wood that has rotted. It is crucial that any hives purchased be free of infection. Before making a sale, check the brood combs for evidence of brood disease. The sale shouldn’t go through if there is sickness present or if there is any uncertainty. Hives shouldn’t be bought in the late fall or winter because there could not be any brood. The telltale symptoms of brood sickness might not be noticeable if there is no brood. 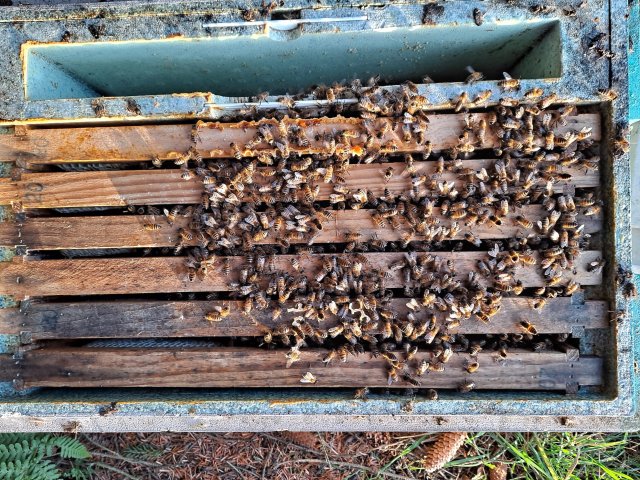 A nucleus is a small colony of bees in a box with three, four, or five combs that contains all stages of brood as well as honey and pollen. It is also referred to as a nuc. It has a queen that is laying and enough bees to cover the combs. Nucs can be purchased through bee equipment suppliers and beekeepers that are selling them. A cage containing a specific number of bees—typically one or two kilograms—makes up a package of bees. It also has a queen, escort bees (workers), and a feeder to feed the bees while they are traveling in a separate, smaller cage. The package bees are moved into a hive that has been built for them when they arrive at the apiary.

A swarm typically consists of a queen bee and a large number of workers. In the spring and early summer, swarms often depart from managed hives and feral bee nests between mid-morning and mid-afternoon.

Ways to Increase the number of bee colonies

Bee Colonies can have their nuclei (or nucs) removed in the spring to lessen their propensity to swarm. More than one nucleus may be obtained in colonies that are particularly robust and have a significant number of adult bees. Bee Colonies as a whole can split to create several nuclei.

Swarms easily take up residence in old bee hive boxes with beeswax and propolis on the interior walls. Only foundation-supported frames may be placed in catch boxes. Robber bees could spread any disease organisms present to their own bee colonies if combs are placed in capture boxes.

What should you know about Examining the hive Process

What should you know about honey quality