What to do and what should be done if a bee stings you?

Bee stings typically happen outside, and the majority of the time, home treatment is sufficient in lieu of medical attention. People with a bee sting allergy, however, may experience more severe reactions that need for emergency medical attention if they are bitten by one or more bees. In conclusion, bee stings can result in both severe allergic reactions and momentary, short-term pain. The amount of stings received, the length and shape of the sting, and the type of bee all affect how painful the experience is. Children typically respond to bee stings more severely than adults. Additionally, adults are more likely than kids to pass away from anaphylaxis. Most home remedies for treating bee stings may be sufficient if there is no bee allergy and no severe allergic reaction. When bees sting, a poisonous chemical is released, which can result in symptoms like pain, redness, and swelling. This toxin causes allergies in some people. The sting under the skin should be squeezed with the nail and removed with the use of tweezers in order to lessen the toxins released by the bee’s sting. Then, by giving ice compresses to the area where the bee stings were received, it is possible to stop swelling and agony. An antihistamine like Benadryl, which has distinct formulae for children and adults, may offer relief if the itching and swelling are severe. You should always carry an insect and pest allergy gel if you have previously had anaphylactic shock after being stung by a bee. Because applying this kind of gel can stop a severe allergic reaction in the event of a second bee sting. Additionally, you should refrain from scratching the sting site to lower your risk of infection. This is due to the fact that scratch development can make itchy, swollen, and red skin worse. 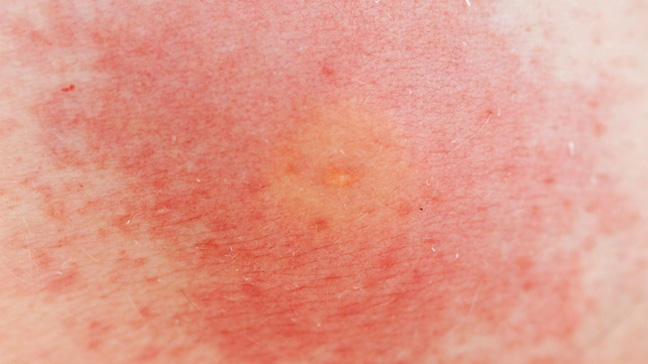 Depending on the person’s level of allergy, bee sting symptoms can differ. A bee sting can cause a person to respond in a mild or severe way.

-Mild reaction: Usually, no medical intervention is necessary. Burning pain, skin swelling, redness, and moderate swelling are some of the symptoms.

-Severe response: A severe allergic reaction, also known as anaphylaxis, can happen minutes after being stung by a bee and pose a serious risk to life. It is necessary to provide an auto-injector-dispensed dosage of epinephrine (adrenaline) and seek rapid medical assistance. It may be followed by symptoms including scratchy skin, throat swelling, breathing problems, nausea and vomiting, disorientation, a rapid or sluggish heartbeat, and unconsciousness.

People react to bee stings even if they are not allergic to bees. In the area of the bee stung, swelling, itching, redness, and pain are frequent symptoms brought on by bee stings. These symptoms can be reduced by doing certain actions. Here are some recommendations for treating a bee sting:

-To lessen the swelling where the bee stings were, compress can be administered with the use of an ice pack.

-Using an antihistamine, such as diphenhydramine (Benadryl), is advised to lessen swelling and irritation.

-Ibuprofen or acetaminophen may be tried as painkillers.

While the pains typically subside rather quickly, the swelling and itching may persist for several days. A person should seek medical help if they experience a severe allergic response. This is due to the fact that antihistamines like diphenhydramine can only slow down anaphylactic reactions. If anaphylactic sufferers are not given prompt medical attention, they may pass away from the reaction.

How long does bee venom last?

A bee sting frequently results in pain, itchiness, and swelling in that location, which can be uncomfortable for a few days. But other individuals experience a more serious allergic reaction. Allergic reactions to bee stings can result in severe body rashes, throat or tongue swelling, breathing difficulties, diarrhoea, vomiting, a sharp drop in blood pressure, and even death. A venom sac and sting are typically left on the skin after a bee stings. After the bee has left the skin’s surface, the toxic fluid from the venom sac will continue to circulate throughout the body for a little while.