Getting ready for the queen bees birth 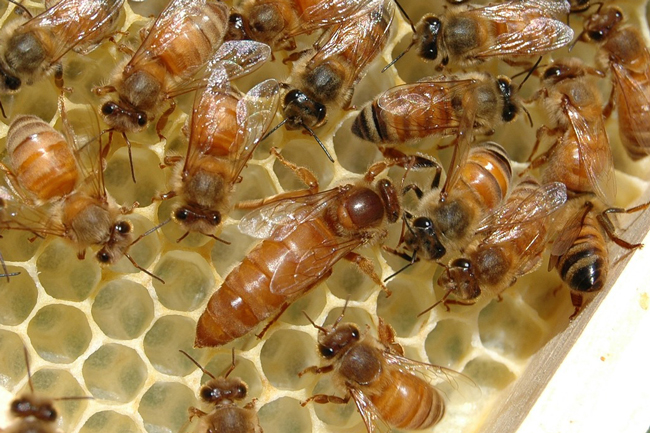 The workers start to build queen bees cups, which are cells on the surface of the comb but facing vertically downwards, when the colony needs a new queen—for instance, if the old one dies or is old and ineffectual in her laying, or for other reasons that will become evident later in the book. If everything goes according to plan, the queen lays fertilized eggs into the cups (just like worker eggs), and a new queen is created. A queen bees emerges from her incredibly distinctive cell after 16 days. Upon the worker bees’ consent, The newly crowned queen fights any other newly emerged virgin queens in the hive after dispatching any prospective rival queens still in sealed cells by stinging them through the cell wall.

The quantity and quality of the food provided to the larvae is the only factor that distinguishes a worker bee from a queen. Compared to worker larvae, the queen larvae receive a significantly higher percentage of royal jelly over a longer length of time. The amount of worker mandibular gland secretions in royal jelly is significantly higher, and the difference is clearly noticeable. However, quantity is also vital, because queen larvae must take much more food than worker larvae. Royal jelly has up to ten times more pantothenic acid and eighteen times more biopterin than the food provided to worker larvae. The respiration and growth rates of queens and workers during the first two or three days of larval development are comparable. The queen’s rates rise,

This chapter serves simply as an introduction because the entire subject is so complicated. But you must keep in mind that worker and queen bees begin life identically and that only dietary differences can result in significant differences. In reality, all fertilized eggs begin as future queens. The bulk of them alter their diet to become worker bees after three days of development. Others continue to rule as queens. Recent findings from the Australian National University could help to explain why consuming royal jelly makes honeybee larvae develop into queens rather than workers. Researchers from the university’s Research School of Biological Sciences have shown that feeding young bees a lot of royal jelly flips a genetic switch that decides whether they’ll become queens or have menial lives. They discovered that royal jelly appears to interfere with the expression of genes that convert juvenile bees into workers and appears to chemically alter the bee’s genome through a process known as DNA methylation. Without using royal jelly, scientists were able to “suppress” a gene that regulates DNA methylation, and they found that the larvae started to transform into queens with the corresponding fecundity. rather than as unproductive employees. They think this is the first time DNA methylation in insects has been connected to a functional process. The majority of animals, including humans, go through this molecular process.

There won’t be any eggs in queen cups to hatch into queens if the queen dies or is removed unexpectedly. Then, the workers will select immature larvae under three days old in existing worker cells, draw out the cells, feed them as for queens, and generate emergency queens as a result. The effectiveness of these queens in comparison to planned ones has been the subject of considerable discussion and research, although it is clear that the bees do not always select the best larvae and that some of these emergency queens are, at most, adequate. This is important to keep in mind, and in Chapter 11 when we discuss raising queens, we bring it up again.