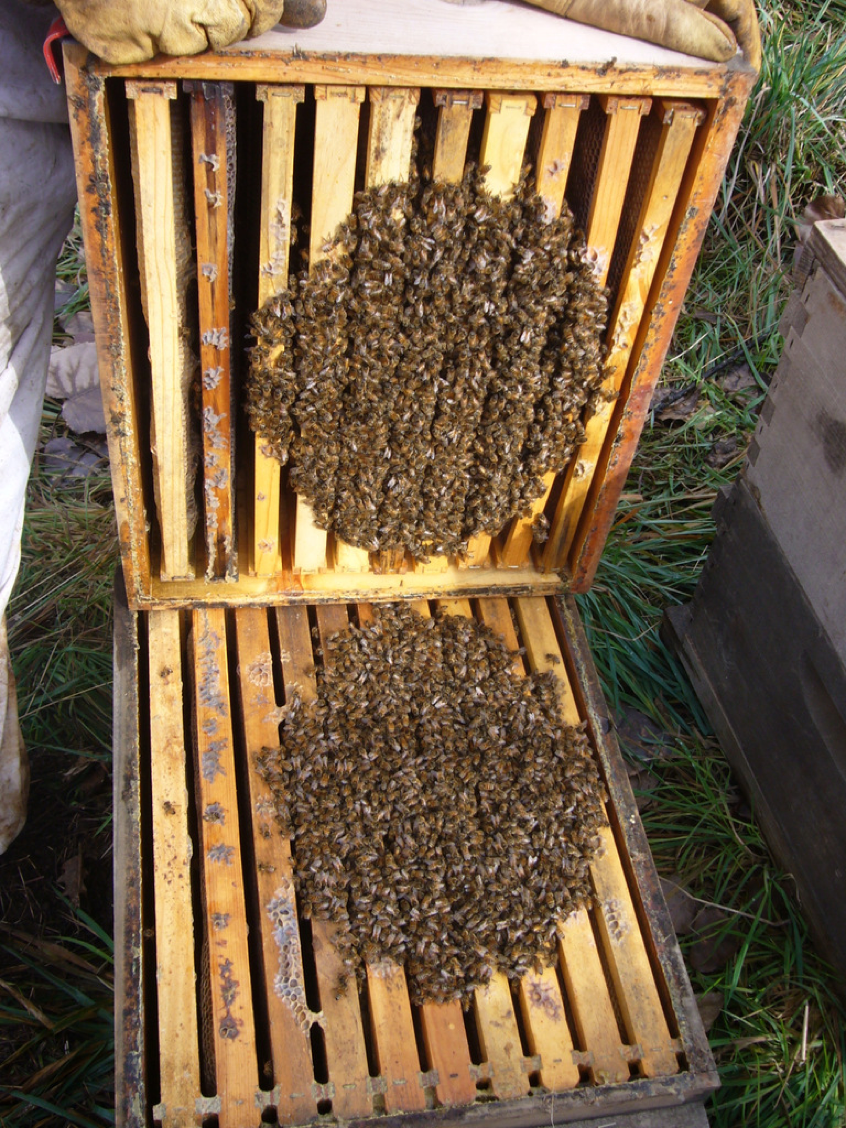 Early spring management is mostly focused on maintaining enough food supplies, followed by mite and disease control. Bees typically congregate in the fall close to the honey’s bottom layer of combs. They progressively consume these stockpiles while climbing up between the combs over the winter. Food supplies run out when the cluster ascends to the hive’s top level. Colony storage can be assessed by tipping the hive on its side and weighing it, or by looking at where the cluster is in reference to food sources. In February and the beginning of March, colonies should be examined, but they shouldn’t be opened until the temperature is over 40°F, preferably in the midday sun so that the bees have enough time to regroup if necessary. Avoid disrupting the cluster when determining its position. The cluster may not leave the brood area to keep contact with its food reserves after brood raising starts early in January, so it is crucial to have enough honey and pollen sources situated above and to the sides of the cluster. Additionally, even if food is there, bees will not migrate vertically or downward into lower boxes in cold weather to reach it. Emergency feeding can be required if the cluster is close to the top of the hive. Pay particular attention to how much honey is accessible to the bees above and on either side of the cluster. Colonies that are discovered to be low on supplies before late March (early April in more northern locales) are challenging to manage. Since feeding clustered bees sugar syrup adds stress, it is typically not advised. The bees struggle to handle the extra water and invert the sucrose. Only if you are positive they are disease-free can you feed bees stored combs of honey taken from colonies with an excess or from colonies that perished over the winter (readouts). Colonies that require winter feed should remove several empty frames/combs and replace them as near as feasible to the cluster without disturbing it with frames of honey.

• Once you start providing extra food, you should keep doing so until the nectar resources are plentiful naturally; otherwise, the bees risk starvation. • Feeding sugar syrup in the spring may prevent the bees from being hungry, but it also stimulates brood raising, so colonies may require more management to prevent swarming in the middle of spring. Bees need pollen in order to raise their brood. Verify that there are enough supplies kept in the brood area. Pollen substitutes are available from bee supply suppliers and can be used to increase or supplement pollen supplies (see appendix). Only if colonies are fed before natural pollen becomes dependable is such feeding economically viable. To prevent robbery, the equipment from colonies lost during the winter should be removed from the apiary or at the very least shut up.

Also, read Everything you need to know about Beeswax product

Before they mildew or disintegrate inside the combs, remove clusters of dead bees. It’s not necessary to take out every dead bee from the cells; once they’ve dried out, you can either shake them out or leave them for the bees to take out later in the spring. Any honey that is left over most likely will ferment if it gets wet. Attempt to ascertain the cause of the colonies’ demise (e.g., disease, mites, too small a population, starvation). Use this honey to feed newly installed packages or nucs or to feed colonies that need winter feed if you are convinced it is from a disease-free colony. Colonies that have perished from American foulbrood should be destroyed.

All you need to know about Bee Workers