Queens are raised using a variety of techniques. Depending on how many queens need to be raised, a person can choose from a variety of possibilities. There are differences among seasoned queen-rearing enterprises in how they raise queens. This is a result of people having a preference for an approach that works well for their particular application. A novice queen-raiser ought to be open-minded about different approaches. After some trial and error, the beekeeper who is raising queens will find a method that works for him or her.

This is a non-grafting method widely used

Step one of the Miller Method:

Choose the queen mother hive that you intend to employ.

Step two of the Miller Method:

Create a frame by Putting a fresh foundation frame into the hive containing your queen source (This is your mother queen). This frame is merely a standard, plain frame. The comb has “V” cuts throughout. The only thing I would advise is to set the frame in between two more brooding frames. It usually takes a few days for the bees to draw out the foundation and for the queen to start laying in the comb when foundation is used. Prepare a cell-building hive once the queen has laid eggs in the new cells.

The cell building hive is set in the same way as any other technique. I like colonies without queens that are well-supplied with sugar syrup, have a big number of bees, especially young bees, and have frames with some pollen and sealed brood. You must eliminate all attempts by the bees to raise emergency queen cells if the frames include young larva and eggs. They’ll do this at the expense of breeding queens from the larva and eggs that you give them from the queen mother that you’ve chosen. 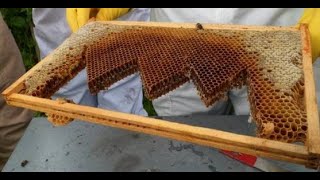 Take the chosen frame out of the mother hive, shake all the bees off of it (you could also brush them off), and then saw the comb into five or six “v”-shaped pieces, each containing a juvenile larva or egg. Instead of using cells on the face of the comb, like the common emergency cell, the bees will make queen cells along the edge of the comb. The comb only has eggs for a short distance toward the edge, according to Miller. The youngest of the brood is left near the edge of the comb after this portion is removed. One explanation for this is that, given a choice, bees clearly prefer to nest on the edge of a comb. Another reason is that I much prefer having cells on the edge, which makes it simpler to remove them when necessary.

When the young queens are just a couple of days away from emerging from their cells, you will still need to make a number of nucs for the queens to be reared.

After that, you can cut the finished cells from the comb and add them to your nucs. This approach will produce queens that are just as good as those produced by the Doolittle approach. At the intersection of the V cuts, the queens often build three or four queen cells. After that, these are cut out and put into the nucs. Similar to swarm cells, these cells are huge. The number of bees in the cell builder and the amount of food provided to the bees determine the size and number of cells that are generated. This non-grafting technique is the least expensive because you already have all the necessary tools and it almost always works.

Everything you need to know about Beeswax product Advice on how to raise queens bees